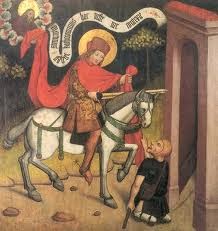 Here is the second of the three letters of Sulpicius Severus on St. Martin

Translation:
After you left me in the morning, I had settled down in my cell and that thought stole up to me which often has occupies me- the hope for the future and the aversion to the present; the fear of  judgement and the dread of punishment- and, what follows and from where the whole thought descends, the record of my sins returned to me, sad and worn out. (2) Then, after laid out my limbs, tired because of my anguished mine, on my little bed,, as I am mostly accustomed to do out of out of sorrow, sleep crept up- which as it is lighter and uncertain in the early morning, so it, wavering and doubtful, was scattered through my limbs, as what does not happen in any other sleep, almost awake, you perceive yourself sleeping--(3) When, suddenly, I seemed to see bishop Martin, adorned in a white toga, with a fiery face, eyes like stars and bright red hair. In this way, he seemed to have the appearance and form of a body in which I knew him so that, what is different is difficult for us to day, he could not be examined, while he could be recognized. Smiling at me, he held in his right hand that little book which I wrote about his life. (4) I, embracing his holy legs, as usually, I asked his blessing. I felt his hand placed on my head with a very soft touch, when, among the solemn words of blessing, he repeated that name of the cross in an intimate way. Soon, with my intent on him, I could not be satisfied with his face or his visage, suddenly being taken up, he was snatched from me until, in the immense vastness of the sky I followed him travelling in a sweet cloud. He was received into open heaven and could not be seen beyond.

(5) I saw, not much later, the blessed priest, Clarus, his disciple, who recently died, climb by that same road as his master. I, rashly desiring to follow, tried to struggle towards them on high and woke up. I, roused from sleep, began to congratulate myself on my vision which I had seen, when a young relative came to me, his face sadder for speaking and giving pain.

He said, "Two monks are here now from Turo. They announce that lord Martin is dead" I admit, I fell and I wept very much with tears springing up. Truly, even while I write this to you, brother, tears flow. Nor do I allow any solace for this, my unendurable pain. Truly, when it is announced to you, I wanted you to share  my grief, you who are an associate of my love.

(7)  I cam immediately to myself so that we mourn equally whom we love equally, although I know that, of all men, Martin must not be mourned. (He is one), after the world is conquered and the age triumphed over, to whom the crown of justice will be granted. (8) However, I am not able to rule over myself. I am in pain. Indeed, I sent ahead my patron, but I lost the solace of my present life.

Letter #2 is the first of the two letters dealing with the death of St. Martin and is clearly the most emotional of the two. As we'll see in the next segments, Sulpicius gives vent to his grief to a point which can legitimately be considered excessive even in the less emotionally inhibited context of the late Roman period. Indeed, the whole of the third letter is explained by the suggestion that perhaps he gets a bit carried away in this letter.

In our passage, however, we see a fairly standard after death appearance of the a saint to a faithful disciple. There is an echo of this in the Life of Martin, when Martin sees the rising of a far-off bishop. Here, Sulpicius is supernaturally blessed by Martin before the news of his death has reached Sulpicius' monastery. This is, of course, logical, given Sulpicius' role as St. Martin's literary agent and protector and, no doubt, would have the effect of building up Sulpicius' spiritual credentials for continuing in this capacity. This sounds needlessly cynical, perhaps, but there is a disturbing undertone to this story which makes one wonder.

Watch for the second installment of this letter in a short while.

Posted by Phil Snider at 1:21 AM No comments:

The Fathers of Nicaea

Phil Snider
Toronto, Ontario, Canada
A Latin teacher, a Christian and a reader of the Fathers.